Though evenly distributed across England the family of Eden, whose numbers included the Prime Minister Sir Anthony Eden, have had a long association with County Durham with notable connections to Windlestone, West Auckland, Beamish in Durham and Preston Hall near Eaglescliffe. The name is thought to derive from Eden (or Yoden) near the Castle Eden Burn in east Durham.

There were 3,050 people called Eden in the Great Britain census in 1881. Lancashire was home to 521; Yorkshire 346 and Durham 200. Of course Lancashire and Yorkshire were much more populous counties than Durham so proportionally the Durham numbers are significant. Only 24 resided in Northumberland and only 43 in Scotland. The remaining Edens were scattered across the Midlands and South with 355 residing in London.

Henry Guppy identified this as a surname peculiar to Durham. A Roger de Egleston is mentioned in Durham in the Pipe Rolls of 1196. It is not clear whether the surname derives from the village of Eggleston in Teesdale on the north bank of the Tees (in the county of Durham) to the north west of Barnard Castle or from Egglestone Abbey on the south bank of the Tees (historically in Yorkshire) to the south west of Barnard Castle.

There were 1,307 Eggleston individuals in the 1881 census, though a small number with the spelling variation ‘Egglestone’ and even ‘Eaglestone’. The two most significant counties for the Eggleston surname and its variants were County Durham with 302 and Yorkshire with 189. In the other northern counties there were 48 in Lancashire and 43 in Cumberland. Westmorland was home to 80 Egglestons which was a significant proportion for a county with a relatively small population. Others were scattered throughout England mostly in the South East with notable numbers (93) in Kent.

Elliott and especially Elliot is a notable Borders surname and is common in the Hawick and Roxburghshire area across the border in Scotland. Elliot, Elliott and its variants are said to derive from an Anglo-Saxon forename Elewald which means ‘the elf ruler’, although the name could also be a diminutive of the name Elias. After the Norman conquest the name occurs as a forename in the form Heliot.

Earliest records of the surname include a William Elyot mentioned in the Assize Rolls for Somerset in 1257 and a William Eliot mentioned in the Subsidy Rolls for Sussex in 1327. It is thought that these south country Eliots (see below) have a surname which derived from Elias and that the Elliott families of the north were descended from an Elewald who lived in Cumberland in the year 1279.

Elliots who are also perhaps named from a place in Forfarshire were present in the Border Country from about 1396. Until the fifteenth century the Elliott surname of the Anglo-Scottish border still occasionally occurred in the form Elwald or Elwold. Spellings were inconsistent and other forms including Elwuad, Elwat, Elwood, Eluat, Eluott, Elioat and Elwand are recorded.

Even today there are at least seventy derivatives of the surname including four different spellings of the basic name which are Eliot, Eliott, Eliot and Elliott. The last spelling is said to be frowned upon by the Scottish Border Eliotts as it seems they could be from almost anywhere, according to an old rhyme:

‘The double L and single T

descend from Minto and Wolfelee,

the double T and single L

mark the old race in Stobs that dwell,

The single L and single T

the Eliots of St Germans be,

but double T and double L,

who they are nobody can tell.

Henry Guppy’s observation of the Elliott name (in its various forms) was that it was found principally in Durham and Northumberland and Roxburghshire and neighbouring Scottish counties. He noted other important centres in Derbyshire, Buckinghamshire, and Sussex and noted the remarkably scanty or absent nature of the name along the east coast from Kent to the borders of Durham.

Spelling variations of Elliott/Elliot/Eliot in the census of 1881 may have been partly at the mercy of literacy but we will compare the distribution of the three main spellings:

In 1881 Elliott with the double ‘l’ and double ‘t’ was the most numerous of the variations in the 1881 Great Britain census with 25,524 individuals called Elliott. They were most notable in the northern counties of England (there were only 584 in Scotland). In Yorkshire there were 2,525 Elliotts; in Durham there were 2,326; in Northumberland 1,916 and in Lancashire 1,550. Cumberland was home to 443 and Westmorland 29. London was home to 2,556 Elliotts with significant remainders across the South East, South, South West and Midlands.

Elliot with the double ‘l’ but only a single ‘t’ seems to have been the preferred spelling in Scotland in particular. There were 7,684 Elliots in the Great Britain census of 1881 with 2,864 residing in Scotland. These were mostly in the lowland and Borders area and particularly Roxburghshire.  Outside of Scotland they were most numerous in the northern counties of England:  Durham 602; Cumberland 503; Northumberland 469; Yorkshire 465; Westmorland 26. Most of the remainder were centred in and around London and in the Midlands. Minto and Wolfelee mentioned in connection with this version of the surname in the poem above are places in the Scottish Borders.

The very rare surname Eliot with single ‘l’ and single ‘t’ only seems to occur 496 times in the Great Britain census of 1881 with 98 of these in South West England. The St Germans mentioned in the poem above in connection with this variation of the surname is a place in Cornwall where Eliot is the family name of the Earls of St Germans. The majority of the remainder of Eliots could be found in the Midlands and South East.

There were other minor variations of the general surname occurring in various spellings such as Elliat; Elliett, Elleiott, Ellott, Ellyatt and even Elloitt but all occurred in very insignificant numbers in 1881.

Ellwood may be a variation of the Elliott group of surnames (see above) and was predominant in the Lake Counties in the 1881 census. There were 1,686 people with this name in that census with 258 in Lancashire; 253 in Cumberland; 196 in Westmorland; 142 in Lancashire; 120 in Durham and 20 in Northumberland. When the comparative populations of the counties are taken into account (see end of this page) the surname is proportionally very significant in the Lake counties of Cumberland and Westmorland.

There were only 15 Ellwoods in Scotland with the rest spread across the Midlands and South East with notable numbers in Cambridgeshire and London. The variant surname Elwood with one ‘l’ occurred 562 times in the 1881 census and was widely distributed being most significant in Yorkshire (119); London (83) and Lincolnshire (46).

A North East surname especially associated with County Durham from the place of that name near Sedgefield. Elizabeth Elstob (1683-1756), a pioneering scholar of Anglo-Saxon studies is a notable of this name. She was born and raised in Newcastle upon Tyne.

Elizabeth’s brother was a noted English divine called William Elstob (1673-1715) and their father was a Newcastle merchant called Ralph Elstob who was from the village of Foxton near Elstob. Curiously, the Elstobs claimed to be descended from Welsh kings. In 1881 there were only 293 Elstobs in Great Britain including 106 in Durham and 134 in Yorkshire. Northumberland was home to 19 Elstobs with the rest mostly residing in southern and eastern parts of England.

The surname appears in the Durham Assize Rolls records in 1235 with a mention of a Philip de Ellestob and a William de Ellestobe.

Likely from Eltringham near Prudhoe in Northumberland and certainly a North East surname, especially in County Durham. There were only 316 people of this name in the Great Britain 1881 census of which 220 resided in County Durham. Northumberland was home to 63 of this name but the distribution in other counties was almost negligible. There were 6 in Lancashire; 4 in Yorkshire; 2 in Cumberland and in the whole of Scotland there were only 9 people of this name. The 11 remaining Eltringhams reisided mostly in Hampshire or Kent.

A North East England surname and especially in County Durham but also notable in North Yorkshire. Possibly from the village of Embleton in Northumberland, north of Dunstanburgh Castle. The surname is listed as a Guppy surname ‘peculiar’ to Northumberland. 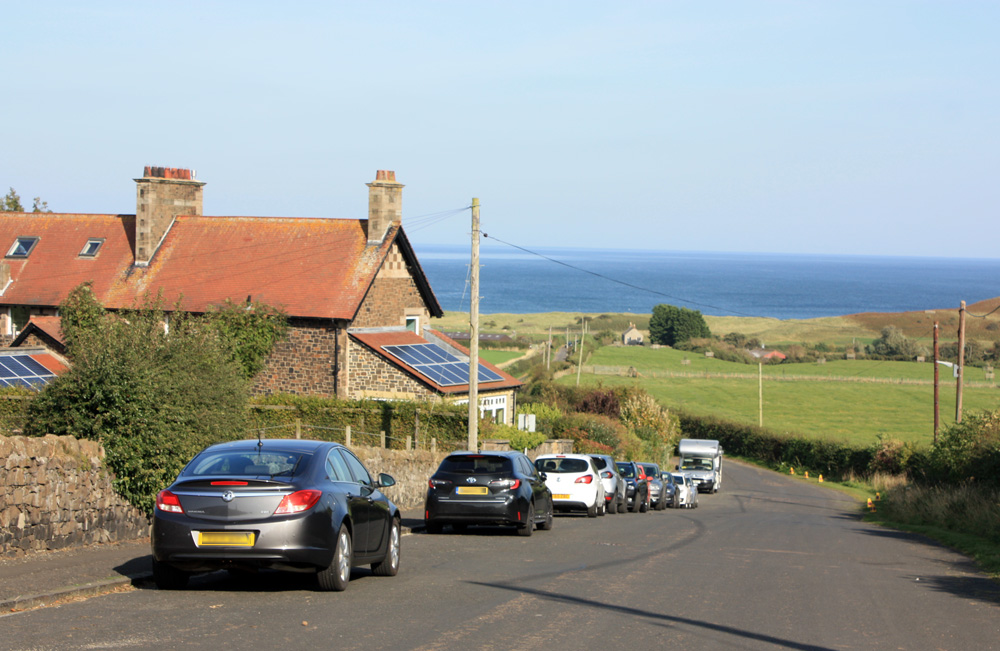 Sea view at Embleton © David Simpson 2020In the 1881 census there were 864 people called Embleton in Great Britain primarily focused upon Durham (285) and Northumberland (251). Yorkshire was home to 45 Embletons; Lancashire 25 and Cumberland 5. Most of the remainder could be found in London and the South East.

Emerson and Emmerson are North East surnames found especially in County Durham. Emerson is also found to a much lesser extent in Northern Ireland. Emmerson with the double ‘m’ is much more widespread in England and lowland Scotland than Emerson but is still mostly a North East surname.

Henry Guppy identified a strong link to Darlington for centuries. Noted family members have included the mathematician, William Emerson (1701-1782) of nearby Hurworth.

Emersons and Emmersons are descended from an Aemeric of Crook Hall near Durham City. The name appears in charters relating to the Priory of Finchale near Durham in 1411 with a mention of a William Emeryson. A John Emmerson was the Mayor of Newcastle in 1660.

In the 1881 census the surnames with either single or double ‘m’ seem to have been widespread, existing side side by side. Collectively the two are easily most numerous in County Durham with 1,159 individuals. There were 741 in Yorkshire; 297 in Lancashire; 260 in Northumberland and 121 in Cumberland. Across Scotland there were 147 Emmersons or Emersons with the rest distributed across eastern and south eastern England including London.

A Northumbrian surname in origin from a place in Northumberland of that name near Chollerton. The surname has an important presence in County Durham. A family called Errington held property at Elton near Stockton in the reign of Queen Elizabeth I and a Northumbrian Jacobite by the name of Lancelot Errington was noted for his seizure of Lindisfarne Castle during the 1715 rising.

An old surname ‘De Eshe’ associated in medieval times with the village of Esh to the west of Durham City. There are only 36 people with this surname in the entire 1881 census, with 7 in County Durham where they were found in the Hunstanworth area, and 29 in Yorkshire.

Medieval barons of Durham and Northumberland

Also occuring with the spellings Euer and Ever this is a notable North East family surname of times past. Kirkley the site of a tower house called the Turris de Kirklawe in 1415 (now the site of Kirkley Hall) was the principal Northumbrian seat of the Eures from 1267. They were also owners of Witton-le-Wear in County Durham from 1370 where they built Witton Castle in 1410. Several Eures were High Sheriffs of Northumberland.

The family were often involved in the Border troubles and warfare and one Eure who was a Warden of the East March burned the Scottish town of Jedburgh in 1644. Over in Yorkshire the Eures were owners of Stokesley for which they established a fair in 1223 (still going strong today) which they established with the permission of King Henry III.

A Sir Ralph Euer was the Member of Parliament for Newcastle in 1380 and 1381. The family were sometimes also known as Ever and were connected with the name of the Ever Tower on the town walls of Newcastle upon Tyne. 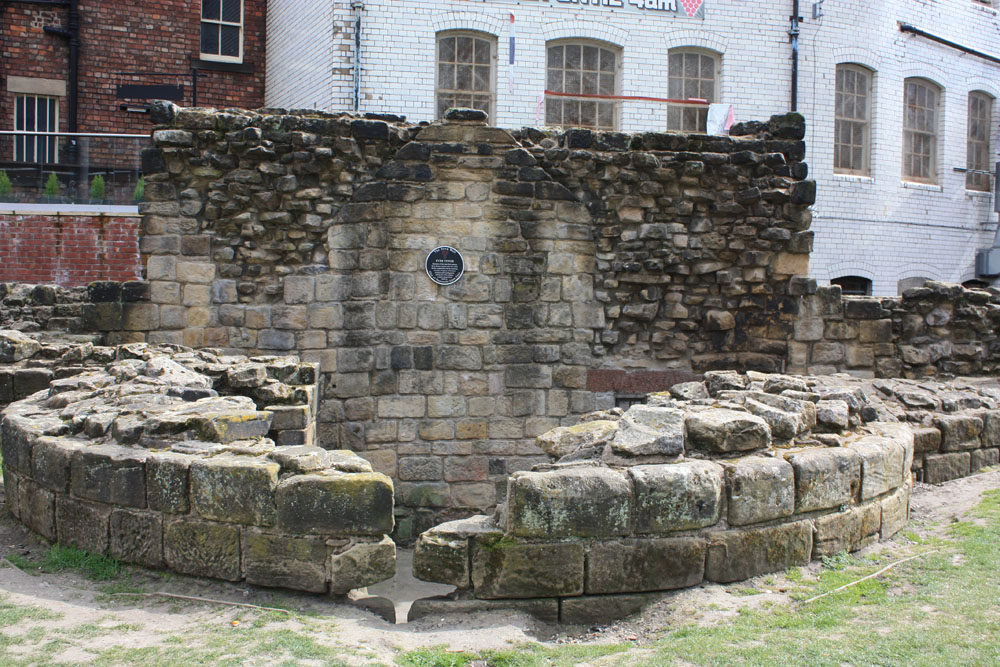 Remains of the Ever Tower, Newcastle Town Walls © David Simpson 2021

Note on the populations of English counties in 1881

When comparing figures for individual numbers of a surname in 1881 it is important to be aware of the actual population of each of the Northern English counties. As you can see from the figures below, 500 individuals with a particular surname in Westmorland would be proportionally much more significant than 500 people of the same surname residing in Lancashire. You might well describe such a surname as a ‘Westmorland name’ but the numbers would not be significant enough to describe it as a ‘Lancashire surname’, at least not as defined by the 1881 distribution. The 1881 northern county populations were as follows: