Geordie words beginning with F, G and H. The phrases in bold are translated at the end of the page.

Faa: To fall, also the name of a Gypsy clan (the Faws) and a general term for a gypsy.
Faalen Wrang: Pregnant.
Fadge: A kind of loaf / girdle cake.
Fash and Fashed: To Trouble or to bother.
Fatha: Dad. Especially in County Durham. “Me fatha’s gan doon the toon”.
Fell: Hill.
Femmer: Fragile or easily broken. A Viking word.

Gadgie: A man, usually an old man, an aad gadgie, or an official of some kind. Word of Romany gypsy origin. An ‘aad Gadgie’ is an old man.
Gaff: Old theatre or cinema. A cheap theatre was called a ‘penny gaff’ or flea pit.
Galloway or Gallowa’: Pony.
Gallusses: Braces (for trousers).
Gan: Go. From the Anglo-Saxon and Viking word for go.
Gan Canny: Go carefully. Take care.
Gan on the Hoy: To go out drinking.
Gang: Variation of ‘Gan’, see above.
Gannin: Going – Gannin’ alang the Scotswood Road to see the Blaydon Races.
Ganny: Grandmother. Especially Sunderland and also South Shields.
Ganzie / Gansey: A jumper / sweater.
Garth: Yard or Garden. “Haad on ma, aw’s wetchin Garth Crooks on the telly”…”Nee bether, aboot time they catched those gnome thieves”.
Gate: Usually means ‘way’ or ‘street’ often found in older North East street-names like Gallowgate, Bondgate, Gilesgate. “Gan yer ain gate” means go your own way. As in the well-knaan Fleetwood Mac sang “Ye can gan yer ain gate”.
Gaumless: Stupid or useless. A Norse word.
Geet: Geet. Very or great. ‘Geet walla’ means very big.
Getten: Got. “Aw’s been getten a new fern” – I’ve got a new phone. Ooo!
Geordie: A native of Tyneside and especially Newcastle. Historically the term seems to have been a term for a North East pitman and not just those from Newcastle. Geordie seems to have been more widely used as a term for people throughout the North East and especially the former mining areas but over time, especially in the later twentieth century it has come to be applied more to Tyneside and Newcastle in particular. See also Mackem.

See our article Who is a Geordie?

Gie: Give. See also Give.
Gill: A ravine.
Girn: Grimace or grin.
Gissy: Pig.
Give: Given. “It was give to us.”
Give Ower or Gie Ower: Stop doing that, it’s annoying.
Glaky: Awkward or slow in wit.
Glee Ee: Squinty.
Gliff: A fright.
Glower: Glare or to gaze in wonder.
Gob: Mouth also known as a mooth.
Good: Well, healthy. “Aw’s good thanks”.
Googley: Staring, rolling prominent eyes.
Goosegog: Gooseberry.
Gowk: A fool, a cuckoo (the bird) or also a core as in an apple core.
Gox: God. As in Begox – By God.
Grand-Da: Grandfather, especially in Durham but could also be Grandfatha’.
Graft: Work hard
Grund: Ground.
Gulley: A large knife.
Gyet: Gate or way, road etc.
Gyetsid, Gyetside: Gateshead.
Gyezend: Thirsty / thorsty.

Haad: Hold can also occur as ‘haud’.
Haad yer pash: Be patient.
Hacky: Dirty / dorty. “Me spade’s hacky”. Also means Lazy.
Hadaway: Get away as in you’re having me on or ‘on you go’ as a form of encouragement. Thought to possibly derive from a naval / nautical term with a variation haad or hau’d away (hold way). The word Haway (Ha’way) may be a contraction of this.
See also Haway and Howay.
Hadden: Get a hold of it.
Haipeth: Half Penny.
Hanky: Handkerchief.
Hard: Heard.
Hardlies: Rarely, scarcely. “A’wve hardlies bin thor”.
Harrin’: Herring.
Hather: Heather also known as ‘ling’.
Haugh: Pronounced Hoff or Harf – flat riverside land eg Derwenthaugh, Blakehopeburnhaugh.

Haway: A phrase of encouragement: ‘press forward’ / ‘on you go’, usually including an apostrophe as in ‘Ha’way’ that suggests a contraction of the word ‘hadaway’ (see above). In football it has come to be most closely associated with the phrase ‘Ha’way the Lads’ associated with Sunderland football club (where the phrase is marked out in the stadium seats). The now preferred Newcastle United football club equivalent is ‘Howay the Lads’ (see also Howay) meaning ‘come on lads’ though the two terms howay/ha’way were once seemingly interchangeable despite their original different meanings. Both Howay and Ha’way have long been used (including in conjunction with ‘the lads’) across both Tyneside and Wearside as well as around the wider North East.
Heor: Here.
Heugh: ‘Hyuff’. A spur-shaped hill or promontory such as that at Hartlepool or Tynemouth or Segger Heugh at Sacriston.
Hev: Have. ‘Te’ hev and te’ haad’.
Hewer: Coal miner who works at the coalface.
Hinny: Honey – a term of endearment. “Y’areet hinny?”
Hoggers: Pitmen’s trousers.
Holm: Island in a river or dry land surrounded by marshy land, river meadow.
Hookie mat: Home-made mat.
Honkers / Honkas: Ya’ honkas / On your haunches. Was a popular resting / sitting stance for North East miners.
Hoos: House.
Hope: A side valley, especially in the dales of Northumberland and Durham for example Hedleyhope, Burnhope, Sweethope.
Horts: Hurts.
Hes or Hez: Has.
Hoppings: A fair or dance from the Anglo-Saxon hoppen meaning fair. The Toon Moor Hoppings are held in Newcastle.
Hor: Her.
How: A call for someone to pay attention, be alert. See ‘How Man!’ below.
How Man: Hey be careful man, calm down, listen to what I’m saying be sensible etc.
Howay: A phrase of encouragement or invitation to accompany oneself meaning ‘come on’ / ‘come along’. The phrase ‘Howay the lads’ is now often associated with Newcastle United football club though it seems to have been interchangeable with ‘Ha’way the Lads’, a phrase that has a slightly different root and now more often associated with Sunderland football club (see Haway and Haddaway). Originally ‘Howay’ seems to have meant come along, come my way while ‘Ha’way’ meant press forward / on you go.
Howay Man: Come along hurry up etc. The phrase “Howay-man-woman-man” might be addressed to a woman who needs to catch up or speed up either physically or mentally. When addressed to a male the phrase is simply “Howay Man!”
Howfing: Huge, great.
Howk: Scratch or pick.
Hoy: Throw. “Gannin on the Hoy” or “Gan on the Hoy” means to go out drinking.
Hoyin’ Oot: Throwing out, or pub closure time.
Hunkers: See honkers.
Hyem or Yem,  Hame: Home. Scandinavian origin. More rarely occurs as ‘hame’ but that word is more common in Scotland. ‘Aw’s gan yem’ means I’m going home. 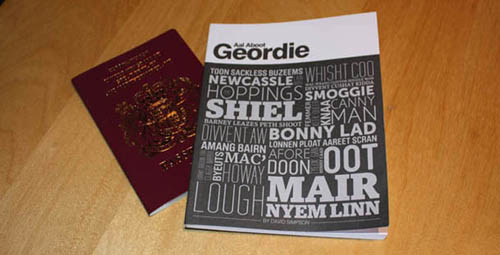 Translations and explanations we hope

A foolish person getting rather cold on a remote hill without a cell phone.

Come on my dear throw away your old half-pennies (they’re no longer legal currency – haven’t been for years).

Please help support this site. Even a small donation goes a long way to keep things running. Thanks for supporting 😊