Keeping a site like England’s North East running, costs time and money to develop and maintain. We started it as a hobby but it’s increasingly become a challenge to maintain and develop.

We set up a crowdfund site to help with this aim and thanks to our supporters this successfully contributed towards the target. Thank you to all who donated. Although the crowdfund is now closed you can still donate to the site using the button/link below.

👇 We suggest a contribution of £15 using the link below.

👆 You can donate using the link or button above. This links to our PayPal page but you don’t need a PayPal account. Note that the donations are paid through our sister site Tangled Worm

This will help to keep the site maintained and goes towards developing new content, new features, research and new images and helps with the running costs of the site.

Thank you and very best wishes,

The Viking history of the River Tees is explored in a series of YouTube videos by David Simpson.

In an English region where borders and frontiers have shaped history more than any other, the River Tees is one part of the North East that’s often overlooked. Yet this valley has one of the most distinct and varied histories within the region and was as much a frontier as the Tyne, Hadrian’s Wall, the Cheviot Hills or County Durham’s ‘Land of the Prince Bishops’.

The story of the North East role as a frontier is covered in our new You Tube series: The Five Frontiers with four short videos covering each of five frontiers from the Tees to the Tweed.

Surprisingly, Scotland’s borders once stretched to the Tees and in the first of four videos covering the Tees we look at this legacy and the influence of the Baliol and Bruce families, both of whom once dominated the Tees valley and both of whom would produce Scottish kings. We discover how the Tees became a short-lived border for Scotland and became a focus for Scottish raids that sometimes bypassed much of the region to focus on the Tees.

The Tees was not just a Scottish frontier, however. In fact the earlier ‘frontier’ history of the valley is crucial to understanding the role of the North East’s distinct history and role as a borderland. The revelation of the river’s role in this respect is revealed through an exploration of the Viking period when the Tees became a distinct cultural frontier that separated off the rest of the region and helped form the North East’s distinct identity of which the Tees itself formed a part.

In the first of the four videos covering the Tees we explore the period when the Tees became the Scotland border before heading into the earlier period of Viking settlement that would partly inspire the nineteenth century Scottish poet, Sir Walter Scott in his Teesdale-themed work ‘Rokeby’. Scott partly draws on Viking place-names and themes including the Norse inspired river and stream-names: Balder, Thorsgill Beck and of course the famous ‘force’ waterfalls with their Viking terminology. Scott’s poem is set in a much later period – the Civil War – but Scott seems to have understood the earlier role of the Tees as a frontier drawing on its distinct Viking place-name nomenclature.

In our second video covering the Tees we see how two of the most famous Viking Kings to reign within England had associations with the Tees. Eric Bloodaxe met his end here in this valley as a result of a political intrigue associated with the old fault line within the Kingdom of Northumbria that lay along the River Tees.

The river separated the political sphere of influence of the ‘Kings’ of Bamburgh from the Viking kings of York and the downfall of Bloodaxe really marked the beginning end of the end for Northumbria itself. The other great and powerful Viking king associated with the valley is Cnut, the Danish king of all England who held land within the valley which he bestowed upon the Community of St Cuthbert at Durham.

The third of the videos covering the Viking heritage of the Tees looks at the Viking Wapentake of Sadberge – the Viking territory that lay just north of north of the river as well as exploring Viking place-names along the entire course of the valley.

South of the river we explore the strong Viking associations in the Cleveland area, focused upon the prominent hill of Roseberry Topping, once called ‘Odin’s Berge’ a former centre of Viking pagan worship. In this video we also look at the legacy of the unique and fascinating Viking hogback sculptures that are unique to Britain and most significantly focused on the Tees valley and neighbouring Northallerton ‘Allertonshire’ area of North Yorkshire.

In the fourth video again exploring the history of the Viking valley of the Tees we find the story of the Sockburn Worm, a probable mythological legacy associated with the Vikings and set within a loop of the river that has significant Viking links as well as connections to the Christian heritage of Northumbria. Finally, downstream from Sockburn within another loop of the Tees we visit the town of Yarm where the remarkable discovery of Britain’s first Viking helmet find was made.

At some point the Tees-themed videos will be followed by more videos covering the other frontiers of the region, namely Northumberland’s border country; the River Tyne and Hadrian’s Wall Country; County Durham’s Land of the Prince Bishops and of course the region’s magnificent frontier coast.

How well do you know North East England? Test your North East knowledge with our latest North East quiz.

1. Where did the Victoria Hall disaster that claimed the lives of 183 children through crushing at a music hall event take place?

2. Where would you now find the Cale Cross, a former market cross that once stood on the Newcastle Quayside?

4. What is the historic estate village of Raby Castle that once gave its name to a medieval shire?

6. In which Durham village will you find a manor house of the 1670s, and an Old Hall of the early 1600s alongside a substantial village green where there is a sculpture commemorating a footballing feat?

7. Which alcoholic drink was invented by Lieutenant Colonel James Porter in 1927?

8. Which area of Durham City is thought to have a name that means ‘swan island’?

9. Kielder Water reservoir is situated in the valley of which North East river?

10. Name the Middlesbrough-born songwriter, whose creations include Fool (If You Think It’s Over), Let’s Dance, On the Beach, The Road to Hell and Driving Home for Christmas

11. What was the name of the Sunderland songwriter who wrote the Christmas song Little Donkey?

12. Which impressive National Trust property in Northumberland built by Sir John Vanburgh suffered from disastrous fires in 1752 and 1822 that leaves much of the building an empty shell to this day.

13. What is situated near Bishop Auckland and described as one of the largest ancient monuments and one of Britain’s most important early industrial landscapes with traces of early medieval mining, medieval field boundaries and evidence of Iron Age farming settlements?

14. Which North East river changes its name about half way along its course after passing the site of Bewick Mill?

15. Born in 1959 what is the real name and stage name of the Leeds-born and Darlington raised comedian who formed a unique partnership with a Middlesbrough-born comedian.

16. What is the Wrekendyke and which North East place was named from it during the nineteenth century?

19. The prominent cone-shipped building of 1787 at Lemington in Newcastle was a former works used in the manufacture of what kind of product?

20. What is the name of the famous North East born actor and comedian who was a former pupil of Durham Chorister School near Durham Cathedral?

21. Which rugged North East castle, now a National Trust property, was converted from a castle into a private residence by the architect Sir Edwin Lutyens?

22. Oswin, a King and saint of Deira is reputedly buried at which North Eastern coastal location?

23. Which North East town was once used as the film set for the TV series Supergran?

24. Where in the North East will you find the Old Low Light, New Low Light, Old High Light and New High Light?

25. At what North East park might you find Neptune in the middle of a lake, a folly in the form of a medieval tower and a temple of Minerva?

26. Dainty Dinah was the brand name for sweets and toffees once produced in which North East town?

27. What is the name of the Billingham-born actor who played the title role in the 2000 film Billy Elliot?

28. What was the name of the British Prime Minister who was born at Windlestone Hall in County Durham? 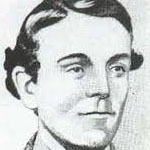 29. For which famous anthem was the songwriter Geordie Ridley (pictured) principally remembered?

30. Which North East waterfall can be found in a little valley near Bellingham in North Tynedale where it cascades with “sudden dash and bound and splash, with rout and shout and roar and din”?

31. What horrific event, the worst of its kind in North East history happened on the morning of Thursday, January 16, 1862?

32. What is the alternative name for St Mary’s Island near Whitley Bay?

33. The Dickens novel Master Humphrey’s Clock was inspired by a clock maker working in which North East town?

34. Which sheep-like breed of dog takes its name from a Northumbrian mining town?

35. What lies just offshore from the coastal village of Amble and takes its name from Amble’s river?

36. Football manager Sir Bobby Robson MBE was born in the Durham mining village of Sacriston but in which neighbouring village did he grow up?

37. What is the title of the man depicted on the statue in the centre of the market place in Durham City and which North East town and coal port was he famous for building?

39. Which noted US politician whose ancestors took their name from Roddam in Northumberland also has ancestral connections to the Stanley area of County Durham?

40. Jeremiah Dixon of Cockfield in County Durham gave his name to which border in the United States that subsequently gave its name to which kind of music?