Chef’s wife and food blogger, KIRSTIN HANNAFORD heads to Prezzo for a pre-match meal with her dad before joining the crowds for some festive season football

There used to be a time when a midweek home match at St James’ Park followed a set pattern. I’d rush to get finished at work by 6pm and race down into the centre of Newcastle to meet my dad for a bite to eat before heading to the ground to take our seats in time for kick off. That was back in 2010 when relegation to the Championship after 16 years in the Premier League led to an increase in games on weekday evenings, and I still cared enough to sit in the cold for 90 minutes knowing I had to be up early for work the next day.

Six years on I still make it to most Saturday afternoon matches, but it’s been a good few years since I spent an evening shivering in the crowd watching 22 men run around the pitch at St James’ Park hoping I’d be repaid for my efforts with the glory of a win.

So when my father offered me the chance to accompany him to the Nottingham Forest match during the lull between Christmas and New Year, I decided it was time to get the layers on and join the other 50 odd thousand folk hoping for another three points. Plus, a spot of Italian cuisine and a night with my dad had far more appeal than another evening of eating left-over turkey curry and watching the Big Fat Quiz of the Year on catch up.

Feeling pretty fed up with festive fodder, I booked a table at Prezzo, located on the edge of Old Eldon Square’s “hippy green” in the spot that once housed fellow Italian chain, Strada.

Prezzo opened its doors in Newcastle in November 2014 and became the company’s 250th restaurant. It immediately blended in with the plethora of high street pizza pasta chain restaurants that appear to be multiplying in the city centre, each presenting identikit menus to droves of hungry customers, often seen clutching two for one vouchers.

For many people the idea of a chain is synonymous with mediocrity, but this doesn’t need to be the case although such unimaginative places frustrate my husband. Apparently they are the culinary equivalent of painting by numbers. However, Mr Chef wasn’t invited on this occasion and while I understand his preference for a good old fashioned trattoria, where mama lovingly serves up a hearty Italian feast, there is something slightly reassuring about a familiar menu and recognisable surroundings when you have a quick turnaround and you’re feeling rather peckish.

As I approached the glass fronted restaurant on what was a surprisingly mild December evening, I could see my father waiting expectantly in the doorway and so we swiftly made our way inside.

We were met by a direct but not unwelcoming waitress who showed us to our table at the front of the restaurant looking out over Old Eldon Square and the multiple crowds of teenagers set for the night with their beer cans in hand, each trying to outdo one another with their bizarreness.

The restaurant has a modern interior over two floors with a mix of tiles and wooden panelling lining the walls, shiny silver light fittings and neutral décor giving a contemporary minimalistic feel devoid of any real atmosphere. Most of the tables were occupied by diners of varying ages, families with children and a number of obvious fellow match goers, so I was pleased to have booked in advance. We settled down at our table and surveyed the menu which as expected contained a selection of pizzas, pastas, risottos, salads, and meat dishes. 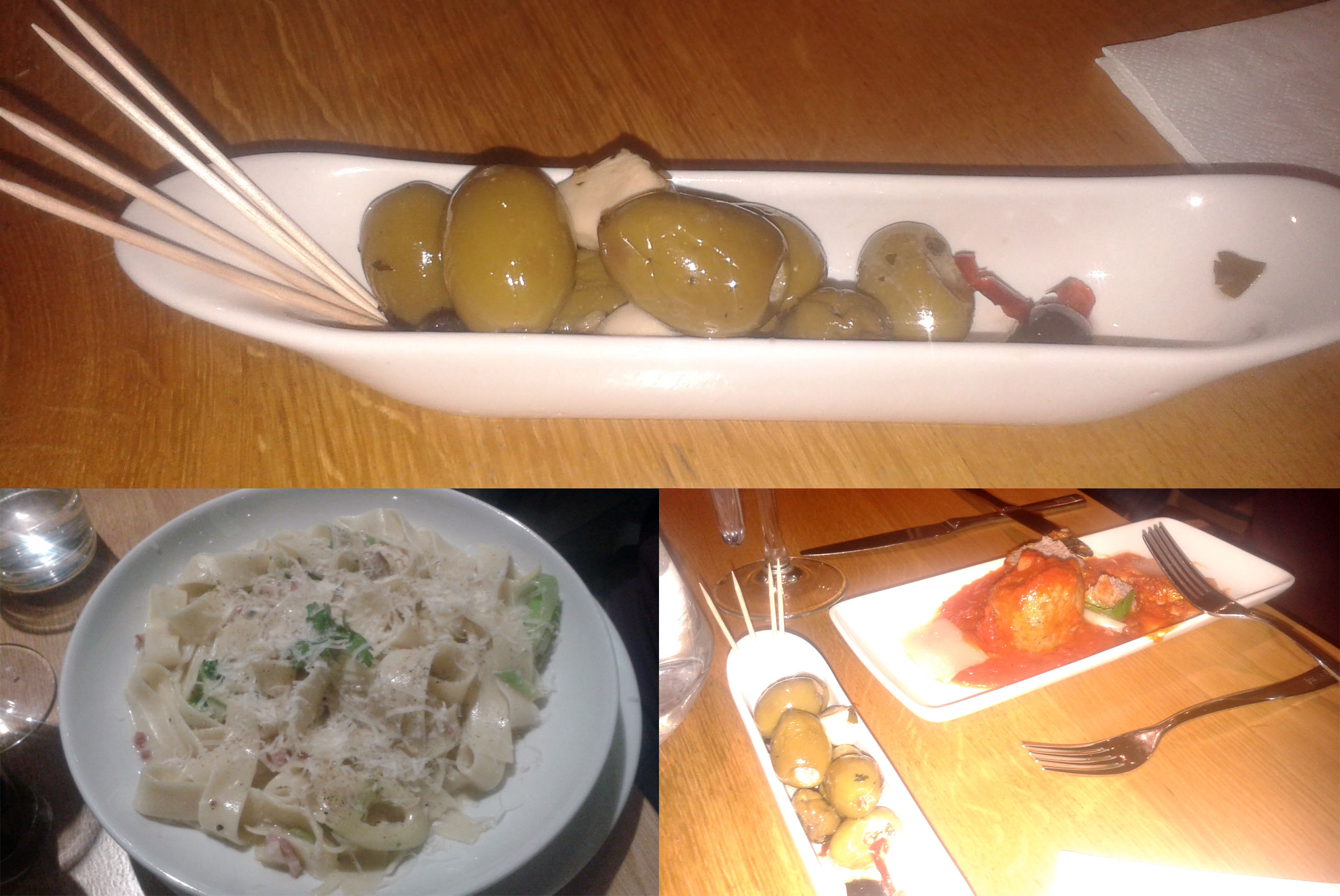 As anyone who lives with a chef will know every good Italian meal should contain wine and olives, so I decided to start with marinated olives and a large glass of Merlot. My dad on the other hand opted for polpette gigante, large meatballs made of veal, pork, beef and pancetta. Having always been a bit of a cheapskate, he chose to accompany it with a glass of house white which perhaps predictably was a tad sharp.

The mixture of black and green olives served in a light olive oil with peppers, garlic and herbs was full of flavour and proved a successful choice in taking the edge off my hunger. My father’s meatballs were tasty and came in a tangy tomato sauce, dressed with basil and some kind of unidentifiable cheese slivers which he described as somewhat insipid.

On to the mains which arrived promptly once the starter plates were cleared. I plumped for prosciutto e funghi pizza (Prosciutto ham, mushrooms, olives, rosemary, mozzarella and tomato), but chose the light option which is made with a smaller flatbread base and is complemented by a side salad with optional dressing.

My dad played devil’s advocate and decided on pasta. His large bowl of pappardelle gorgonzola (chicken, pancetta, leeks, broccoli and parsley in a gorgonzola sauce) looked appetising enough and the pasta was cooked perfectly, however the sauce was disappointingly bland and lacked the depth of flavour promised by the prospect of a rich creamy blue cheese sauce. Mine was an okay pizza; a thin and crispy base just on the safe side of overdone with a decent amount of ham and mushroom topping.

The staff were friendly throughout and the service was on the whole attentive with a check back after the starter and again after the main to ensure everything was okay. We did wait around 10 minutes for my second glass of Merlot to arrive from the bar and at times there was a certain amount of aimless wandering to be observed as waiting staff tried to decide whose antipasto was whose.

Nevertheless, it would be unfair to be critical given that we got exactly what we ordered. The bill came promptly on request as did the amended version once I’d remembered the 25 per cent off voucher I had printed off in haste before I left the office earlier. The bill came to £43.41 which for two courses and three drinks I considered a reasonable price.

And so ended a meal that was generally competent, with a few own goals but no adrenalin surge from a superb shot on target. All in all an unexceptional but okay dining experience. But with the company’s tagline offering to “bring a touch of class to Italian casual dining” I had hoped for a bit more as well as the chance to prove Mr Chef and his cynical outlook wrong.

I suppose that the appeal of many chains is that generally you know what to expect, and I guess we got exactly that, another faux Italian delivering food that fails to surprise, but doesn’t offend.