Coal-mining reached a peak in 1923 with 170,000 miners employed in the Durham coalfield alone but many industries in the North East experienced hard times in the 1920s and 1930s. Demand for industrial products was fading and the Great War had provided only a temporary boost. In 1926 places like Middlesbrough had unemployment rates of 45 per cent. A worse situation was found at Jarrow in 1936 with 80 per cent unemployment. The men of that town set out on their famous hunger march to London. However other industries still had their part to play. One of the North East’s great achievements of this era was the building of the Sydney Harbour Bridge in Australia and the similar iconic landmark of the Tyne Bridge. New industries like plastics at Billingham were also beginning to emerge.

Since 1900 public transport has become common place throughout the region. Motor buses and trams serve the major North East towns.

The Tees Conservancy Act instigates the extensive reclamation of Seal Sands at the mouth of the Tees.

Coal-mining reaches a peak in County Durham, employing around 170,000 miners.

The first manufacture of ammonia in Britain is undertaken at Billingham by Brunner Mond. The ammonia will be used in the production of ammonium sulphate fertilisers. The chemical works at Billingham become part of the newly-formed Imperial Chemical Works Company (ICI).

Harold Macmillan is elected as MP for Stockton-on-Tees.

Newcastle United Football Club reach the FA Cup final for the sixth time in their history, defeating Aston Villa 2-0 at Wembley, in front of a rain-drenched crowd of over 91,000.  Newcastle’s two goals come late in the game, from Scottish-born Neil Harris and County Durham’s Kelloe-born Stan Seymour in the 83rd and 85th minute. It is the second time in their history that Newcastle have won the FA Cup but this is their first appearance and victory in a Wembley final. Their previous cup win, in 1910, was played at Crystal Palace and followed by a replay at Goodison Park, Liverpool.

Thirty-eight lives are lost in a mine disaster at the Montagu Colliery at Scotswood near Newcastle after an inrush of water flooded the mine from the old Paradise pit.

The General Strike brings industrial activity to a halt throughout the country. Miners are among those striking this year over wages and working hours. Male unemployment is high throughout the region – in Middlesbrough it is 45 per cent – particularly when compared to the national average of 14 per cent.

Newcastle United become champions in the highest tier of English football, winning the First Division title with 56 points (there are 22 teams with two points for a win and one point for a draw). It is the fourth time they have won the title. Third-placed Sunderland finish on 49 points behind runners up Huddersfield Town on 51 points. Meanwhile, Middlesbrough are promoted as champions of the Second Division. Middlesbrough forward George Camsell, (born Framwellgate Moor), is the top scorer in the Second Division with an astonishing 59 goals that include nine hat-tricks. 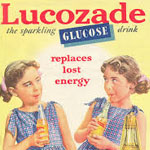 Newcastle chemist, William Owen, based in the Barras Bridge area of the city invents the drink Lucozade which he initially calls Glucozade. The name is changed to Lucozade in 1929.

The Tyne Bridge is built linking Newcastle and Gateshead by Dorman Long of Middlesbrough and is opened on October 10 by George V. In fact its official name is the George V Bridge.

Anhydrite, also known as dry gypsum, is used in the production of fertilisers. The mine 700ft beneath Billingham consists of miles of grid-like subterranean streets.

Armstrong’s factory at Elswick on Tyneside has been forced to merge with Vickers of Sheffield. The factory has been unable to diversify since the end of the war.

The Derwenthaugh Coke Works open near the banks of the River Derwent and Tyne near Blaydon.

A new bridge is built across the River Wear in Sunderland. It is designed by designed by Mott, Hay & Anderson.

William Handley, a chemist develops the household cleaner Domestos in his garden shed at Byker. He had purchased Sodium Hypochlorite from the chemical works at Billingham to use in its manufacture.

The North East Coast Exhibition of 1929 at what will be called Exhibition Park in Newcastle. It showcases North East industry and enterprise.

19 shipyard closures in the region in the last decade result in the loss of thousands of jobs and contribute to heavy unemployment throughout the region.

About 80 per cent of Jarrow’s workforce is unemployed. This is because of a slump in demand caused by the end of the war and the huge number of unemployed men returning from service.

Chester-le-Street’s anarchic annual Shrove Tuesday football game is played for the last time due to the damage to shops in the main street, which hosts the game. The event is thought to have medieval roots. A similar tradition continues at Sedgefield and Alnwick.

Newcastle United Football Club win the FA Cup final at Wembley, defeating Arsenal 2-1 in front of a crowd of 92,298. Arsenal take the lead in the first half but Newcastle reply in the 38th minute with a goal from their home town forward, the Newburn-born, Jack Allen. Allen would follow this up with a winning goal in the 72nd minute.  This is Newcastle’s seventh appearance in an FA Cup final and the third time they have won it.

The Sydney Harbour Bridge is completed by Dorman Long of Middlesbrough, the bridge was in fact commenced before the similar Tyne Bridge at Newcastle.

The impressive Ravensworth Castle near Gateshead is demolished.

5,000 are employed by the chemical industry at Billingham.

Hawthorn Leslie has reduced its workforce at Hebburn by about a fifth over the last two years. It now employs around 1,000 people. Many industrial firms have had to take similar actions.

There were six shipyard closures in the region from 1931 to 1933 further increasing unemployment.

The Duke and Duchess of York open the Newport Lifting Bridge across the River Tees on Teesside. It has been built by Dorman Long.

The Municipal Museum of Science and Industry is established featuring many exhibits from the North East Coast Exhibition of 1929. It will later be known as the Discovery Museum.

The famed ship, RMS Mauretania built at Wallsend in 1906 makes her last journey. Heading from New York to Southampton, her fittings are sold off before she heads for Rosyth in Scotland for breaking up.

The Conservative MP for Jarrow is ousted by Labour’s Ellen Wilkinson, formerly the MP for Middlesbrough.

A new chemical plant at Billingham makes oil and petrol from creosote and coal through a process called hydrogenation. The production of plastics was established last year.

King George V dies at home at Sandringham and is succeeded by his eldest son, Edward VIII. However, the yet-to-be-crowned king’s plan to marry American Mrs Wallis Simpson creates a constitutional crisis because not only is she a ‘commoner’ but she is already married and for the second time too, having divorced her first husband.

Sunderland, who had finished second to Arsenal last season become champions in the highest tier of English football for the sixth time in their history, taking the First Division title. Middlesbrough finish fourteenth in the division while Newcastle United finish eighth in the Second Division. The goal scoring talents of local lads Bobby Gurney and Raich Carter contribute considerably to Sunderland’s title gain, although the division’s top scorer is West Brom’s William ‘Ginger’ Richardson of Framwellgate Moor, Durham.

Two hundred unemployed men march 274 miles from Jarrow to London in protest about the recession that followed the recent closure of the town’s Palmer’s shipyard. Around 80 per cent of Jarrow’s workforce were employed at this yard. The route of the march took in 21 stops, including Chester-Street, Ferryhill, Darlington, Northallerton, Leeds, Barnsley, Leicester, Northampton and St Albans. At Leicester local bootmakers worked through the night to repair the marchers’ shoes. Jarrow MP, Ellen Wilkinson joined the marchers for some sections of the journey. A meeting was held in London’s Hyde Park and Wilkinson presented a box containing 11,000 signatures to parliament. The men, sadly, returned home having achieved little but a lasting place in the social history of the region and the hearts and minds of the people.

South Shields-born Eileen O’Shaughnessy writes a poem to celebrate her school’s fiftieth anniversary (Sunderland Church High School). Focusing on mind control in a police state, she entitles it End of the Century 1984. She will later marry the novelist, George Orwell, whose famed novel 1984, (published 1949) has a similar theme.

The Team Valley Trading Estate is established to encourage light industries in the region. It is recognition of the dangers of relying too heavily upon a small number of manufacturing industries which employ many people. The region had been designated a Special Area in the Special Areas Act of 1934.

A regular ferry service commences from the mouth of the Tyne to Bergen and Oslo in Norway.

Sunderland Football Club win the FA Cup for the first time in their history in their second appearance in the final. They defeat Preston North End 3-1 at Wembley. Preston had taken the lead just before half time but second half goals came from Sunderland-born lads Bobby Gurney and Raich Carter, who are both noted as prolific goal scorers. Sunderland’s third goal came from Yorkshireman, Eddie Burbanks near the end of the game.

George VI is crowned at Westminster Abbey. In December last year his elder brother King Edward VIII – who was never crowned – abdicated because of his intention to marry American Mrs Wallis Simpson.

Durham University is reorganised into two divisions: Durham and Newcastle. The Newcastle colleges are grouped under the title ‘King’s College’.

Many cinemas are built in the region in the 1930s, including three at Darlington, four at Gateshead, five in Sunderland and 15 in Newcastle. By 1939, Darlington has more cinema seats per head of population than any other town in Britain.